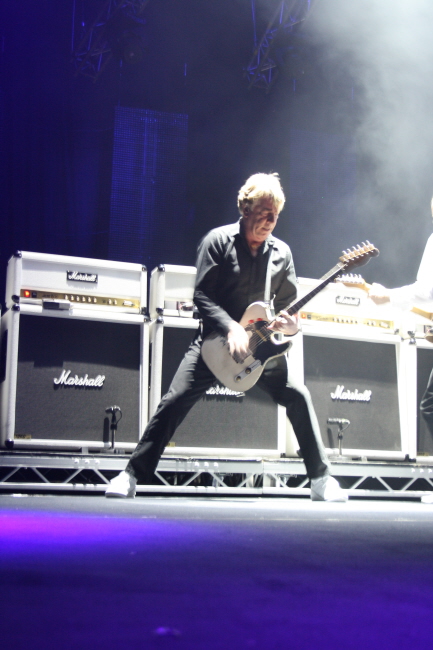 Simon Porter, the band’s manager said, “Rick is now making an excellent and steady recovery from an extremely serious life threatening situation following a Quo show in Turkey last month. He has now had a defibrillator fitted into his chest in order to regulate any future heart issues and has left hospital in order to recuperate with family and friends.

Although I am now happy to report that his medical team anticipate that Rick will make a full recovery, it will likely be a long and ongoing process.

To this end, Rick has given his full blessing for the band to continue with the current summer touring schedule utilizing guest guitarists. Freddie Edwards, son of Quo bass player John ‚Rhino‘ Edwards has successfully stepped in for Rick over recent gigs and will now continue for the majority of Quo’s shows during July and August, the current exceptions being gigs in Leuven, Belgium and Edinburgh, Scotland on July 20th and 23rd where Irish guitarist Richie Malone will step in.”

Rick’s family have said, “We would like to thank everyone including the fans for their messages of support during the last weeks and especially the kindness and care of all the staff at the Royal Brompton.”

Both the band and Rick would like to thank the fans for their continued understanding and support and would like to stress that he will return to the fold as soon as possible, but in Rick’s best interests any return will not be rushed until he makes a full and absolute recovery. No further comment will be made at this time.